Tuesday's entry addressed an inability to understand how presidential candidates presentation technique and personal style possibly overrode impacts of party platform policies on voter’s lives. Yet, the vast majority of media commentary still seems primarily concerned with candidate’s acceptability as individuals. The ridiculousness of that premise is still found incomprehensible whereas the idea remains unfathomable that individuals, for example, would willingly pay significantly more in personal income taxes because Trump seems unpolished or brash to them.

To illustrate the probable costs to voters preferring one they perceive as a quite gentlemanly older man, here’s some data compiled in a Wall Street Journal op-ed by Stephen Moore back on September 30th, 2019. As posted on the Americans for Tax Reform website, household income had reached an all-time high:

“Real median household income—the amount earned by those in the very middle—hit $65,084 (in 2019 dollars) for the 12 months ending in July. That’s the highest level ever and a gain of $4,144, or 6.8%, since Mr. Trump took office. By comparison, during 7½ years under President Obama—starting from the end of the recession in June 2009 through January 2017—the median household income rose by only about $1,000.” 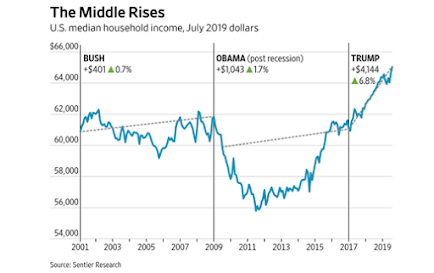 Prior to the onslaught of the Chinese virus, many signs indicated the strengths of the Trump economy.

·        According to then Labor Department Job Openings and Labor Turnover Data, the ratio of unemployed persons to job openings was just 0.8 in July of 2019 an all-time low since this data was first collected in 2000.

·         Hiring and job openings also remained strong – 6 million people started a job in July and there were 7.2 million openings.

·         The civilian labor force had increased by 571,000 according to the BLS household  data, the largest such gain since October 2018 and the fourth consecutive month of labor force growth.

This stood in especially stark contrast to Biden, as well as Democrats both in congress and on the campaign trail that "proposed trillions of dollars in tax increases that would undo the existing economic growth that has benefited American families and businesses across the country.”

Returning us to the confusions arising when a presidential candidate’s current performance in office so far outpaces his opposition’s utmost capabilities it truly isn’t even a contest. Yet media coverage persists in dwelling on aspects of personal presentation demeanor. And that, once again, reminds of the old Henny Youngman gag about the dupe in the diner watching his coat as directed by the sign, which is when they stole his lunch.

MB
Been around a while. Done lots of things in business. Present endeavor is writing. So far, readers like my books. There's no particular blog subject or agenda -just try to post interesting stuff.

More about Mike Berke-Click Below