A friend sent the following copy of a letter from Director of National Intelligence, John Ratcliffe, to Senator Lindsey Graham yesterday, prompting this response from myself.

“One has to wonder if the Republican Senate leadership is clever and sophisticated enough to plan the timing of recent information releases this close to the upcoming election.

“There’s virtually no doubt of invalidity of anti-Trump allegations regarding Russian collusion, the manufactured case against him directed by Clinton with full knowledge of Obama, Biden, Rice, Comey, Brennan, Lisa Page, Peter Strzok and all the rest. Coupling this with current disclosures of abuse of power by Biden as he used his position to enrich his son and six other family members while in office leads to concluding that the Republican strategy centers on unequivocally bringing them all down within a week or two of election day, guaranteeing Trump as a reelection shoo-in.” 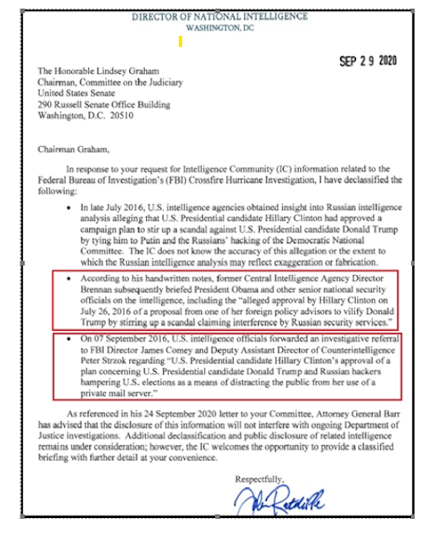 That's it for today folks.

Thoughts of posting about tonight’s presidential debate arise often as hype and promotion of the event continually overflow across all media. They've been avoided to date while no plan exists to view the event either. Although sufficient justification for ignoring the time waste likely requires far more too much text than readers would find tolerable, a condensed version of underlying reasoning follows anyway.

A beginning supposition, taken from innumerable examples, addresses immigration. Supposing Trump was a blithering idiot, unable to articulate precisely while presenting a totally unkempt persona. Biden conversely delivered perfect personal imagery as if possessing incredible intellect along with haberdashery worthy of Gentleman’s Quarterly covers while making his case in verbal perfection. Trump’s platform, though, included a secure border, protecting national assets, treasure and the entire population from dangers arising from unbridled entry by unidentified aliens. Biden conversely offered unquestioned passage to any and all choosing to do so. For all those wishing to keep the nation and its people secure, regardless of a candidate’s personal appearance or articulation capabilities, what is there to debate about?

Moving on to the economy, if raising taxes will quickly strangle the nation’s phenomenal growth exhibited over the past three and a half years under Trump, what is there to debate about?

For those believing in all unborn’s right to life, regardless of any candidate’s appearance, presentation skills or accumulated knowledge, what is there to debate about?

As the list continues, there’s the issue of asset redistribution as fostered by an irrational Sanders and the lunatic Cortez woman. For those believing in entitlement to what they themselves have earned, what is there to debate about?

How about the police? For those preferring not to live in sanctuary’s where criminality, homelessness, personal vulnerability and lawlessness are promoted by government while law and order meet total ignorance, what is there to debate about?

In the case of keeping one’s own health insurance plans and options open as more than 80% of the population does now, as opposed to complete government control in the future, what is there to debate about?

During the past three and a half years its been proven that the nation has risen to the point that it can be self-sufficient energy-wise forever, remaining environmentally pristine at the same time. For those preferring not to return to victimhood by oil producing Middle-Eastern or South American nations economically or otherwise, what is there to debate about?

Then there’s the whole climate change hoax where the Paris Accord would be rejoined potentially costing the U.S. economy $3 trillion and 6.5 million industrial sector jobs by 2040, according to a comprehensive new study prepared by NERA Economic Consulting. Considering that none of the issues presented by climate activists exist nor have ever been proven at all, what is there to debate about?

Believing at this juncture the debate point’s been made regarding the nonsensical leftist substantive issues, that leaves the personal presentation aspects of the event for consideration. And after watching Trump deliver hours of solid, intelligent and outright pleasurable entertainment at his rally’s, even that cannot override having to observe the likely tortuous babblings of a worn-out, probably senile political hack whose greatest accomplishment remains family enrichment through abuse of former public offices held. So, once again, what is there to debate about?

As written in today’s New York Post by Michael Goodwin: “The agreements signed (yesterday) at the gathering on the South Lawn of the White House are fittingly called the Abraham Accords. They mark a new era of trade, tourism and opportunity for millions of Jews, Muslims and Christians in the region.

“Trump clearly savored the moment but, ever restless, says he’s not finished yet. He told reporters he believes the Palestinians eventually will want to negotiate and predicted that, if he wins a second term, he will make a deal with the Iranians, too.

The changes, he said, are just the start of a “new Middle East.” Only a fool would quibble on a day as big as this one.”

Goodwin’s article itself (link attached) is a well-written condensation of how and why Trump’s policy in the region brought the parties to the table, underlying premises being assertion of U.S. strength coupled with a complete reversal of eight years of Obama mismanagement.

Goodwin writes: “Big decisions have big consequences and Trump’s Mideast policy is remarkable not only for its success, but also for its unprecedented approach. The contrast with Barack Obama is especially dramatic.

“Until Obama, recent presidents of both parties followed a similar script of supporting Israel while being a buffer between it and its hostile Arab neighbors. The goal was to be an “honest broker” while guaranteeing Israel’s security as long as it respected American interests in the Arab world. Those interests included oil and, increasingly, funding for the perpetually bankrupt Palestinians, who returned the favor with massive corruption and by making “martyr” payments to the families of terrorists who killed Israelis.

“These transgressions were apparently minor obstacles to Obama, who believed he knew best. He thought he could lure the Muslim world to his view by apologizing for past American behavior and promising to restrain Israel and forcing it to make concessions to the Palestinians.

“Incredibly, he even urged the Palestinians not to negotiate with Israel until Israel stopped constructing and expanding settlements in the West Bank. Obama openly disliked and insulted Israeli Prime Minister Benjamin Netanyahu, once forcing him to leave the White House through a back door, and secretly used American funds to try to defeat Netanyahu in an election.

“His record was perfect — a perfect failure. There were, for example, zero serious negotiations between Israel and the Palestinians for the eight years of the Obama-Biden administration.”

Seen as a first and major step toward bringing regional peace, Saudi Arabia may soon align as well, the agreements also reflect skills and capabilities of Trump himself. Yet, despite his outstanding rebuilding of the U.S. economy, enormous job creation across all races, establishing America as an energy superpower, ratification of USMCA, border security efforts, using tariffs to effectively force the Chinese Communist Party into a bargaining posture, dramatic VHA improvement, worldwide troop reduction and the elimination of terrorist Abu Bakr al-Baghdadi, hatred for the president is still rampant throughout the major media.

As noted by Dr. Robert Jeffress, Senior Pastor of the First Baptist Church, Dallas, Texas were Trump to walk on water, major media reports would flash that “Trump can’t swim!”

MB
Been around a while. Done lots of things in business. Present endeavor is writing. So far, readers like my books. There's no particular blog subject or agenda -just try to post interesting stuff.

More about Mike Berke-Click Below